So much of what I've been viewing lately has seemed simultaneously both very good and utterly terrible — just not at exactly the same time — that I am starting to wonder if it's me, rather than my viewing choices. A sudden swerve of my sensibilities into irresolution. 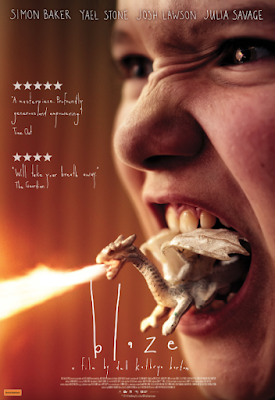 There's undoubtedly much to admire here in this depiction of what happens inside the imagination of a twelve-year-old girl after she unwittingly becomes the sole witness to a brutal rape and murder.
It's a first feature from Australia's Archbald Prize-winning artist Del Kathryn Barton — and, full disclosure here, I think her paintings are humungously, psychedelically awful — so it really does not help that the mind of this survivor is full of the same sort of gaudy junk. There are some great tracks on the OST, yet in situ they too have a certain "look at me" quality, rather like the visuals and tend to cut across the grain of the drama.
The central performance of Julia Savage as Blaze is very good, especially in the more humdrum interactions outside of her inner artistry, but the script doesn't really allow her to come together as a coherent character seeking a new equilibrium.
I think I can summarise by saying that if you loved The Babadook (we did not) then you will probably consider this another minor antipodean masterpiece.

Posted by Inner Diablog at 1:10 am