This high vis investigation appears to have stimulated a mood of self-reflection on the local 'ex-pat' forum. Many will no doubt be wondering if they are likely to be tarred with the same brush. Jolluck, at least, was apparently not camouflaging her pillaging behind a dodgy NGO. 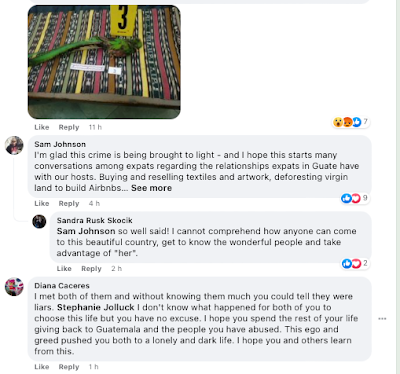 Anyway, the idea that the solution can be found from within the immigrant community is naïve.

The usual human motivational distributions will apply — of any ten inside-outsiders striving to make a living here, around two will be proactively sensitive to the environment and positive in their actions, six will more likely take the path of least resistance and another two will tend to be blood-sucking leeches like Jollluck and Rossilli... 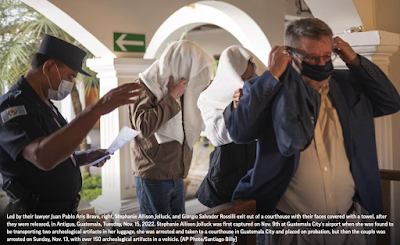 Converting a few from the middle of the curve won’t deal with the fundamental problem; the fact that Guatemala remains a lure for greedy mediocrities is a matter for the authorities to ponder and resolve.

The manner that the country is pitched to outsiders needs to be finessed. Promotion needs to include a raft of incentives and dis-incentives.

There should be little doubt that real economic damage is being done, and not just in the "nature chic" niche these parasites carved out for themselves.

One of my first Guatemalan friends in the 80s was a woman whose mother operated both a large and successful textiles stall in the market at Chichicastenango and a modern fashion outlet in Z1.

These are the "social entrepreneurs" that the country needs, and every cuco gringo that establishes itself here is more often than not displacing the indigenes from an opportunity that would otherwise be available to them.

At her first arrest Jolluck claimed to have acquired the carved stones in her suitcase at a local craft market. This was not just a lie, but a calculated implied threat aimed at scaring the prosecutors into thinking that their actions could create a stink around one of Guatemala’s most important industries, tourism.

To their credit, they handled the situation admirably and exposed the deceit within 48 hours, when the media interest was still fresh, so that Jolluck’s mendacity more or less completely backfired on her and her principal accomplice.

The new claim, that the couple were merely artefact-sitting for a Guatemalan friend who is legally entitled to own them is a novel and fairly risible subterfuge that is unlikely to stand up for long.

1222 items and counting. The quetzal tieso seems to have got under the skin of chapines more than any other stolen relic. 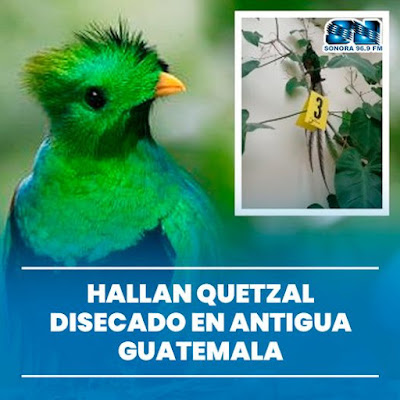 Posted by Inner Diablog at 7:16 pm