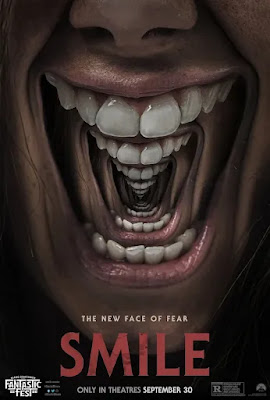 There are many things about the "new face of fear" that don't feel particularly new at all, yet somehow this competently formulaic* horror flick starring Kevin Bacon's daughter Sosi (from S2 of Narcos: Mexico) has a certain freshness to it.
The plot revolves around a personified malign curse with a tendency to pelar la mazorca as it passes from one traumatised individual to another and the race against time faced by Rose the therapist as she seeks to break the chain.
There are jump scares galore which generally feel quite well executed and perhaps the thing which most impressed me in the screenplay was the manner that information gaps were permitted to float within the narrative, writer-director Parker Finn seemingly in no hurry to immediately fish them out with over-timely exposition.
* You surely won't need to rush off here to check whether anything bad is going to happen to Moustache.
Posted by Inner Diablog at 1:04 am