Netflix has given us the first German-language adaptation and whilst the package includes visceral, set-piece representations of trench warfare, it somehow also does some significant dis-services to its source. 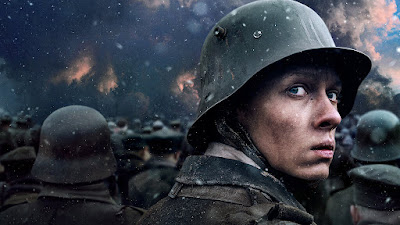 The war movie from the loser's perspective comes with a set of its own self-flagellating tropes (Russia's 9th Company, Germany's Stalingrad and any number of American Vietnam flicks) and these have been generously applied here, along with a bit too much hindsight.

I know, everyone kind of dies in the novel as well, but the essence of that story is the absurdity of the experience from the POV of the individual recruit caught up in combat and this person's national allegiance is never the essence of Remarque's story, yet here we have a parallel narrative of questionable historical value which has been attached and which ultimately tells us little of interest about the bigger picture circumstances at the end of WWI.

Posted by Inner Diablog at 1:39 am