While we continue to stand in line waiting for the 6-course treat that we anticipate José Andrés and Family in Spain will be, we served ourselves The Menu by way of an amuse bouche. 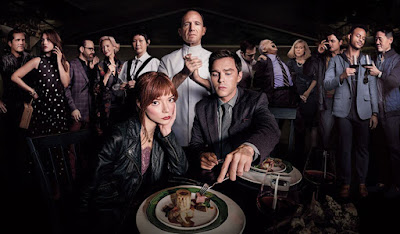 In truth this was also an experience I had longed for since the first emerged and it did not disappoint.

Yet it's not perfect, perhaps appropriately, as this dark and satirical thriller tells the story of a celebrated yet self-loathing chef's attempt to produce the perfect menu (to end all menus) and how, into his island-based restaurant and lair strides Anya Taylor-Joy's 'Margot', an unexpected blemish in the emulsion.

There was a very recent debate about how best to take down the takers of the world set off by Triangle of Sadness. One  of the co-scripters of this movie, Will Tracey, has some notable previous in this respect with Succession, and some of the writing here is superb, especially for the three English leads, but some of the other guests present as weaker caricatures, and one could conclude overall that the movie is better at mocking the industry and its high end pretensions than its punters. (Östlund's gaggle of super rich on the luxury cruise seemed more grounded in circumstantiated observations of how the haves tend to interact with the service industry.)

There are some great performances from the leads, but the pièce de résistance turns out to be Hong Chau as the Maîtresse D'. I went back and re-watched her "tortillas deliciosas" scene a couple of times after just desserts had been served and the credits had rolled.

Posted by Inner Diablog at 4:56 pm