I'd been following the Hoja Nueva story on Instagram for several years and this is not quite the documentary I had anticipated, or rather it is, but it comes with added layers of human ambiguity.

There is undoubtedly a treat for anyone with an interest in the conservation of tropical forests and their wildlife, but I was repeatedly reminded of my own first extended periods in such an environment, aged just 20, and the complex, often jarring thoughts and emotions this period ingrained within me, for life.

So as well as the story of two fledgling ocelots undergoing ‘re-wilding’, learning to survive in their own natural environment, we have two young people from colder climes, also struggling on many levels to find an equilibrium in a forest that will only ever be a borrowed sanctuary for them. 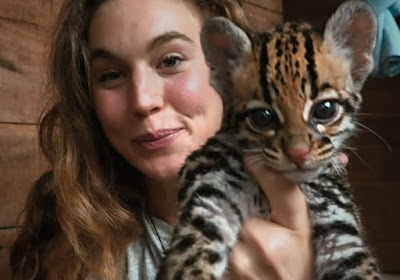 One of them, Samantha, a very focused and determined young post-grad from Seattle, the other, Harry, a former British squadie damaged by his experiences in the Afghan war. Harry’s quest for redemption rather swamps the wildlife narrative.

At the the start of the film the pair would appear to be a couple as well as partners in the project, by the end there has been a severing of the relationship which the directors at least partially paper over, but they allow Samantha the sole opportunity to pass comment and this serves up the most jarring moment in the movie, because she compares her volunteer to her abusive, alcoholic father and at this point everything we have seen has suggested that Harry was the more vulnerable member of the partnership and that her relationship with him at least partially exploitative. *

There may well have been more going on, unseen by the cameras, but this makes the presence of the editor, and that of the anonymous camera-person in many key scenes suddenly all the more palpable.

And at this point one starts to ask the questions one had parked. How is Hoja Nueva set up, academically...financially? Why is there so little actual science embedded in this story? Has Harry's redemptive arc been preserved at the expense of all other reportage here?

Specifically we learn almost nothing about the ocelot (leopardus pardalis) and its habitats that we are unable to see. For sure, on sight alone Keanu makes a stunning impression. Yet this is a species with an especially troubling relationship with humans. I remember being appalled when informed inside the Cockscombe Basin Jaguar Reserve how many ocelots were at one time killed each year for their fur: 200,000. (I forget how many had to die for each coat, but this was in fact the even more shocking statistic.)

Wildcat is a pairing of simultaneously heart-rending and heartwarming human and animal stories that don't always tether entirely satisfactorily. There's definitely a section (Harry's family visit) which works very well as inspiration for younger, would-be conservationists, but as I have noted, it has been set within more enigmatic and occasionally darker material.

Keanu’s story as a wild member of Amazonia continued after the cameras were put aside. Samantha found him badly injured from a hunting incident and had to find a way to patch him up alone at night in the forest with only the help of a distant Vet on the blower.

* Another remark she slipped in — about how she ended up working with wildcats instead of wolves — also rang an alarm bell, or two.

Zwicker lamented the 'politics' of her home state, yet as we seen over the past few years, Peru is by no means a nation without politics, so the apparent implications of this observation immediately brought to mind that subset of gringos in Guatemala who have apparently fetched up here in order to live by their own rules...who like to posture as living resourcefully "off the grid", when they aren't really.

It's a phenomenon almost as old as Latin America, the Jesuits being a stand-out early example of outsiders in search of a place where they might take advantage of what they perceive as a comfortable distance from the mores and regulations of local secular society and its institutions. And as we saw with the missions in Paraguay, this can sometimes lead to a spiral of negative outcomes for all concerned, not least the ‘innocents’ for which the other tussling parties have a duty of care.

Posted by Inner Diablog at 6:48 pm