The first time I set eyes on a Twingo was when I was living in Brussels in 1994.

My then business partner quickly acquired a bit of a thing for them and would point them out to me merrily as we strolled through Ixelles on our way to 16-hour workdays.

They never reached the UK market. I don't know what that says about us. 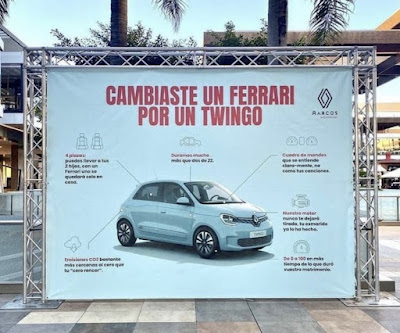 Guatemala City
That same partner soon had a thing for Shakira around the turn of the Millennium. V has reminded me how we had dinner one night at his penthouse and he promised to download her first crossover hit for us to view by the time we'd finished eating. Melonfarming modems...

Together we would both work for the Ferrari Formula 1 team, but that lingering sense of puppy love for Renault's utilitarian city creeper, whose name is a portmanteau of Twist, Swing and Tango, never quite faded, though like the PT Cruiser, or indeed the Ford Sierra of 1980, it rather oddly ceased to look startlingly original after around half a decade. Aesthetic discontinuity has a sell-by date.
La Shaky was the face of the Twingo launch campaign in South America in 1995.
Posted by Inner Diablog at 12:47 am