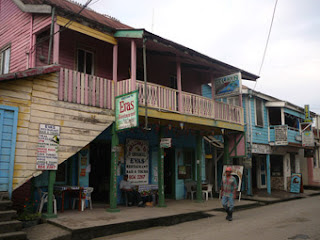 You are never very far from a puddle of green slimy stuff in Belize. Cayo's drainage is pretty much state of the art in that sense.

I haven't stayed here for seventeen years, though I passed through in 2004, long enough to get some Duurly's Parrot rum from a Chinese supermarket. (All the supermarkets and most of the restaurants in Belize are Chinese.) Repeating the transaction last night I asked how much rum I could carry across the border with me into Guatemala. Answer, "a rotta lum". It's not exactly Ron Zacapa Centenario, but the Duurly's bottle fills me with nostalgia.

I thought San Ignacio would too, but it doesn't. Back then it had this last outpost of the British empire feel to it, a real frontier town surrounded by the hootin' howlin' jungle in Belize's wild west. It's still kind of rough, but some of the old clapboard hotels on Burns Avenue have been torn down and replaced with unprepossessing offices made from concrete block. The heart of Cayo is a pot-holed five-way junction that is extremely perilous for pedestrians. I don't suppose that the guests of Francis Ford Coppola's Blancaneaux lodge and the other jungle resorts that now line the Macal river spend a great deal of time here.

Eva's on Burns Avenue describes itself as "the first cyber cafe out west". It is run by a former British squadie that married a local girl. I remember when I first crossed the bridge over the Rio Hondo in the far north it was manned by members of the Parachute regiment in their red berets. Now it is little more than the on-ramp to the bizarre duty free zone that straddles the border with Mexico. There's even a big white casino doing its best to look like a little piece of Monaco in the heart of Central America.

Yesterday was one long bus ride. First the ADO GL service from Tulum to Chetumal. GL means aircon and fabulously comfy seats and a little red light that comes on every time the driver reaches the official speed limit. It also means rubbishy films that play at full volume from little flat screens all down the aisle which makes either reading or quiet contemplation of the narrow green tunnel of scrub around the coach all but impossible. (I tuned into one with Val Kilmer and Neve Campbell set in New Mexico and involving an amnesiac would-be Presidential assassin. It kept me awake, just.)

Chetumal looks remarkably prosperous these days. On our way in to the city centre we passed a huge mall-cinema complex that puts to shame anything we have on the east-side of London. There were no obvious colectivos to negotiate with at the ADO terminal, so I signed up for a bus which appeared to be run by a newly-nationalised Belizean company.

After the hicks and the chics, I had a new bunch of fellow travellers to contend with: the oh-so-pleased with themselves backpackers. From Orange Walk south I was sitting next to a local guy playing thumping reggeton tracks out of his mobile phone, but by far the loudest thing on the bus was a pair of sun-reddened New Zealand girls competing frantically with rtwo all American boys for mochilero kudos: "Have you been...did you do...and we saw..what's your major?" Fortunately when I switched buses in Belize city I was the only non-creole.

No speed limiters on that one - we made our way to Cayo along the Western Highway in the dark at break-neck speed. The skin on my face is still feeling wind-dried.

Belizeans are a fabulous mix of different bloods, and probably around one in every twenty or so individuals is neck-turningly interesting to look at; men and women, young and old, especially the very young and the very old.

So, I now have my Duurly's and yet more habanero chile sauce (the famous Marie Sharpe's) and I am off to the border just beyond Benque this morning, where I will catch another - even more chicken flavoured - bus to Flores on lake Petén Itzá; Guatemala proper, but still an eight hour ride from the highlands and home.

I think I'm carrying more Christmas presents for the dog than anyone else!
Posted by Inner Diablog at 2:25 pm

The backpackers...they are so...cute. I have literally walked up to several at different times in Guate and asked "Where'd you get your uniform?" From the "fisherman pants" (or worse, Solola-style Tzu'tujil pants) to the white-boy (and -girl) dreads and canadian flag symbols, you just want to slap them...I saw a lot of heavy-duty facial piercing in Antigua and Atitlan, also, apparently to show one's status as an urban primitive...or something...they're, like, down with the people, you know, the REAL people, on the street!