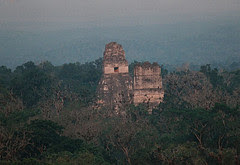 Jared Diamond's Collapse has a good chapter on the underlying causes of the Maya Apocalypto. There's clearly a lot more to it than a lack of access to Catholic Revelation!

Living 1000 miles north of the equator the Maya had to live with very unpredicatable rainfall. The forested south was wetter, but the ground there was that much higher above the water table.

Across the region the leaky karst terrain could be plugged to create reservoirs and in the north there were cenotes. (Tikal had a reservoir that could keep 18,000 people supplied with water for a year.)

Corn − which yields comparatively little protein − made up 70% of the diet of all classes. In this humid climate it could be stored for a year at most. (A bad year was something the Maya could take, but nothing more.)

The only domesticated animals were dogs, turkeys, Muscovy ducks and a stingless bee kept for honey. There was no animal-powered transport or agriculture. "Maya warfare was intense, chronic and unresolvable , because limitations of food supply and transportation made it impossible for any Maya principality to unite the whole region in an empire."

Around 70% of the Maya population were peasants and each farmer could produce twice as much food as they needed themselves. (Ancient Egyptian peasants could produce up to five times their own needs.)

Population levels were at roughly twice the density of the most densely populated states in Africa today (Burundi, Rwanda) − at 1500 individuals per square mile.

There is some evidence of sophisticated agriculture − raised fields, irrigaton, terracing − but comparatively little at the major urban centres like Tikal and Copán .

In Copán from 650AD population pressure was clearly forcing people to start occupying and cultivating the higher slopes and the acidic, more infertile soils up there were being carried down and reducing yields in the valley below.

Pine forest was cut down to fuel plaster production which left the soil further unprotected and may have increased the likelihood of drought because of the role forests play in water cycling. (Diamond notes that the elites covered their palaces and temples with thicker and thicker plaster as the environmental meltdown closed in on them, rather like the Easter Islanders who blithely carved out ever more statues and cut down more trees; he then compares this behaviour to the consumption patterns of modern American CEOs!)

So, apocalyptic collapse is not something that ocurred one time only at the end of the Classic Maya civilisation, it was to a great extent happening all the time as major urban centres and their elite cultures attained a prominence that was in its very nature unsustainable.

Variations in solar radiation cause significant droughts in this region roughly once every 208 years. It looks like a period of relative drought from AD 125-250 was responsible for the collapse of the Pre-Classic city El Mirador in northern Guatemala around AD 150 (Its Danta pyramid rose to 230 ft and is possibly the largest pyramid built anywhere in the world.) In AD 760 the region experienced its worst drought in 7000 years which would account for the next big cluster of urban collapses.

As a result the southern lowlands appear to have lost up to 99% of their population, which receded from a possible high of 14m people to just 30,000 by the time the Spanish turned up. There were further severe droughts in the ninth and tenth centuries: mini-peaks of waterlessness within the macro-disaster.

As ever with Diamond, the conditions leading to societal collapse are taken to be largely structural. But from V's regular rants about the inability of her compatriots to protect and grow their assets, or to direct a sustained effort at any particular enterprise, one has to wonder about the cultural factors too, and about how deeply ingrained some of these might have become.

Diamond certainly hints at a pyschological angle when he refers to the intensified ornamentation that the Maya rulers embarked on when their kingdoms were at their most vulnerable. Yet it seems to me that he is often guilty of a kind of inverted western racialism as he is far more willing to point the finger of blame at the culture (especially the Christian culture) of the Norsemen of Greenland for their own society's collapse, than he is when he describes the responses of non-Western peoples.
Posted by Inner Diablog at 7:55 pm