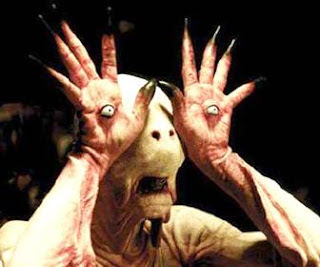 Like Jim Henson's Labyrinth, but with added nightmares. Lifelong nightmares in the case of the under tens I would imagine.

Yet if I had been born within the last decade I'd still want to experience it, even if its monsters were going to chase me around the darkened burrows of my subconscience determined to imprint themselves there forever.

The monsters in question exist on two parallel planes, one fantastic, the other fascistic. The story joins the growing line of treatments of Franquismo that seak to reveal its evil through the imagination of the uncorrupted − such as Carlos Ruiz Zafón's La Sombra del Viento − thereby perhaps sidestepping a more direct (and still controversial) political take. "Innocence has a power Evil cannot imagine" is the story's strapline.

Mexican director Guillermo del Toro went down this route before with his last Spanish-language film El Espinazo del Diablo. That was very good, but this one is close to being a masterpiece.

And yet it's only getting distribution in the UK thanks to a lottery grant, but the word of mouth must indeed be good as it was a sell-out. (Even though the girl at the ticket desk was cautioning punters with the question "You do realise it has subtitles?")

Alfonso Cuarón − another of the young generation of superb Mexican directors − produced the movie and may have had a hand in the casting of Maribel Verdú from his Y tu Mamá También. Both Verdú and Ariadne Gil were in 1992's Belle Epoque. Yet the undoubted stand-out star of the show is Sergi Lopez playing the most evil of stepfathers, Captain Vidal. He's the kind of baddy that makes you want to shout hijo de puuuuuta at the screen until your throat is hoarse.

Perhaps it was appropriate to watch this stunning film on the day that Augusto Pinochet died.
Posted by Inner Diablog at 8:38 pm