End of the happy compromise 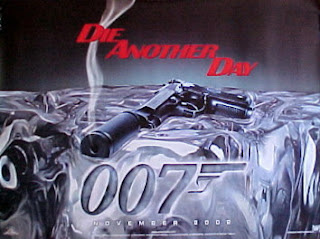 I reacqainted myself last night with the look-away awfulness of the penultimate Bond movie Die Another Day.

There are people that believe that Connery was the essence of Bond and those that think it was Roger Moore. For a while Brosnan seemed like a happy compromise. But perhaps the real divide all along was between 007s with relevant foes and those without.

Connery and Moore were both Cold War Bonds. After them the search for new villains began in earnest. Dalton took on the narcos, but then he had only just finished riding with the ragheads in Afghanistan against the Ruskies. Brosnan went after Rupert Murdoch's evil twin, before thwarting the intentions of a North Korean maniac who had re-engineered himself as a pyschotic English public schoolboy in a Robocop suit.

"While you were away the world changed " M told Bond in 2002. "Not for me," he replied; and he might have added "...not yet" as it turned out, for the writing must have been on the scriptwriters' wall even then.

Daniel Craig's first outing has done much to re-position the character and his on-going mission away from the complete and utter bollocks that was Die Another Day. Yet before we get too excited, it must be noted that although Le Chiffre was an independent mortgages and pensions adviser to the world's deadliest terrorists, the only example we saw of the latter were a pair of AK-waving Ugandan bush guerrillas.

Back in the 60s, 70s and 80s Bond had the courage to significantly reduce the Red Army's headcount when we weren't even at war with the Soviet Union, so will he now finally take on the Islamists mano a mano? (The producers seem to have a weak-kneed reticence on this that Ian Fleming would surely not have approved of.)

Perhaps the old foe is coming to the rescue in its refreshed and re-poistioned new form, the FSB. Radioactive California rolls are just the sort of thing that SMERSH would have loved to have in their recipe book − plenty of collateral damage. (And Lou reckons Scaramella sounds like the sort of bloke that just might have a third nipple.)
Posted by Inner Diablog at 11:40 am