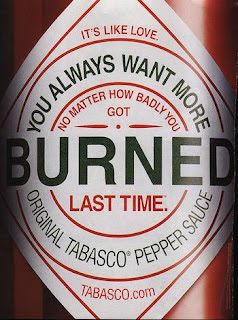 He also pointed out the similarities with Picnic at Hanging Rock, one of my favourite films from the days of my adolescence, and one which also intimates that the ancient, alien landscape of the Aussie outback is relentlessly hostile to non-natives with their empty dreams of civilisation.

By coincidence, the last two novels I have read have been about Tabasco, another region seemingly guided by an enduringly anti-humanist spirit.

The first of these was The Power and the Glory, which was one of those rare books which is almost too good to blog about. Merely good reads have digestible meanings and this blog is the plate where the consumption is supposed to start. But the best literature is in a sense indigestible. It goes in but it doesn't come out - it stays with you, becoming almost a part of your metabolism. I used to read more of that kind of book. Graham Greene's tale of a 'whisky priest' fleeing the firing squads of the red shirts in Tabasco is still rattling around in my gut...

Max Frisch's Homo Faber on the other hand is a novel I want to blog about before I've even finished it. It's narrator leaves La Guardia bound for Caracas. He is an engineer, a typically literalist Swiss called Faber. When his plane comes down in the Tamaulipas desert in Mexico he observes of the moon he has to watch for four nights that it is "a calculable mass circling around our planet, an example of gravitation, interesting, but in what way an experience?"

One of his travelling companions is heading to northern Guatemala to address the future of the German cigar. During the games of chess they play while waiting to be rescued, Faber discovers that this man is the brother of one of his oldest friends and that this friend ended up marrying the woman that he once loved. He abandons his trip to South America in order to follow the German to the plantation owned by his old mücker.

From Campeche they take the (long lost) train south and are the only passengers to get down at Palenque. There they find but one "ruin-lover", an American that initially fails to persuade them to join him in his daily clamberings over the remains of Maya palaces.

Rather like Surfer and me back in '89, the pair become "suspended" in this Tabasco town.

"Every step set the sweat pouring, which immediately had to be replaced with beer...we were suspended in hammocks, with beer within reach all the time, sweating as though sweating were our purpose in life, incapable of coming to any decision, quite contented actually because the beer here was excellent, Yucateca...we lay suspended in our hammocks and drank so that we could sweat better and I couldn't think what we really wanted." (Surfer and I also wound up briefly in another town nearby called Tempisque, similar in all respects except there appeared to be no beer on sale at all!)

Faber laughs aridly when his new pal suggests they go out to the movies together. "Lightning flashed every evening, it was our only entertainment in the evenings. Palenque had a diesel motor that generated electricity but it was turned off at 9pm." The American Maya-enthusiast is a musician from Boston, another of those artist-types Faber observes, "who think themselves loftier or more profound beings because they didn't know what electricity is."

And so they are poised for a journey across the border into what even today is one of the most inaccessible parts of Guatemala. Surfer and I bumped into a similar duo of middle-European sense-of-humour failures on this very route, which is just one reason why Frisch's novel is resonating so much with me.

We had been told that it would be "impossible" for us to reach Palenque from Flores without either going south west and out via Huehuetenango or back into Belize, up to Chetumal and along the northern limits of the Petén to the nearest border of Tabasco. For some reason we took this as a dare and set off on a bus full of prostitutes and gnarly old men with even older rifles (members of the PAC) all bound for the distant military outpost at a place called El Naranjo...
Posted by Inner Diablog at 8:09 pm