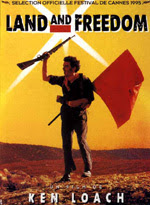 Ken Loach's film from 1995 tells the story of David, a young communist from Liverpool who heads off to the Aragón front in 1936 and finds himself fighting with the POUM against Franco's rebellion, and falling in love with a heasdtrong militia member called Blanca. (Doomed of course.)

On the one hand it borrows its core message from George Orwell's Homage to Catalunya, showing us how the Spanish Republic fell apart from within, as the Communists increasingly conformed to the Soviet model and the aspirations of ordinary people were systematically betrayed. On the other hand, with the benefit of an historical distance Orwell never experienced, it is a moving reflection on Europe's lost ideals.

It's a paradox I confronted myself three years ago when I wandered through an exhibition of photographs from the time of the Republic in Seville. One in particular showed a group of smiling anti-clerical peasants and workers that had taken possession of the cathedral, these days back in the hands of the clergy, the faithful and the tourists. This world where ordinary people could so comprehensively reject what they saw as the the privilege and hypocrisy of their priests seems almost inconceivable now. There are surely still a few atheists left in Seville, but they won't be nearly as organised, nor I suspect, as idealistic.

My heart tells me that had I been born at the time my sympathies would have been with the Republic, perhaps sufficiently to want to defend it. The trouble is that although Fascism is undoubtedly bad, anti-Fascism has rarely managed to keep itself consistently on the side of the good. And my head tells me that Spain would surely not be the modern, prosperous place it is in 2006 had the Stalinists (or even the workers' militias) held onto power there.

The really central scenes in the film are more jaw jaw than war war. You have to be prepared to imagine yourself in the thick of heated debates about matters like rural collectivisation and military organisation, and you have to be prepared to come out of them wondering if there was, or is , a right answer to any of these issues.
Posted by Inner Diablog at 6:02 pm

Have you seen the new India search engine www.ByIndia.com they added all the cool features of popular products like MySpace, YouTube, Ebay, Craigslist, etc. all for free to use and specifically for India. Anyone else try this yet?

This is interesting part of text, even better than Net Entertainment games :-)

Ok , i will be your reader! Could you take a look also on my blog ? http://www.dreamtrigger.net/