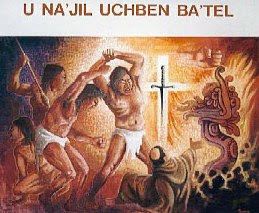 I think I should shut up about Apocalypto until I have actually had a chance to see it. (Though I will be in the Yucatán myself when it is released here.)

Patrick from Guatemala Solidarity seems to share my caution about the race to write it off as "unbalanced" as its mad-eyed director.

I spotted this quote from the Guardian in his post:

"The percentage of Maya speakers in Yucatan state fell from 37 percent in 2000 to 33.9 percent by 2005. Paradoxically, for a state that advertises the glories of the Mayan culture for tourists, it is having a hard time keeping the present-day Maya there; many are migrating to the United States."

Hmmm. Playa del Carmen has been growing at a rate of 26% per annum for many years now; it's officially the world's fastest-growing town. I'd hazard a guess that the dilution of Yucatec speakers in the region has as much to do with immigration as emigration.

Now, if you really wanted to portray the Maya as a savage bunch you'd have to make a film about the Caste Wars in Yucatán in the 1840s. They seem more up Gibson's street anyway. There's even a talking cross and Maya members of its sect referred to their criollo enemies as "Jews".
Posted by Inner Diablog at 10:49 am

If people--including the modern Maya--are merely upset at their ancestors being shown to be warlike and violent, I certainly can't share their reaction. But if--as I suspect (and again I haven't yet seen it, so I should shut up)--Messianic Mel is just doing his Jesus thing, we should all be wary...the concept of one culture overthowing another in order to impose its "superior" morality and way of life should be echoing strongly right now.