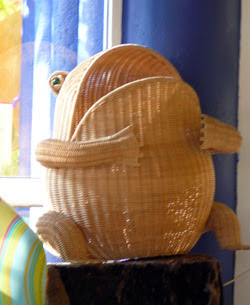 I asked the waiter last night if the name of this place had anything to do with the fact that it was owned by a French couple. He gave me an evasive spiel about little frogs that croaked away in the night and I decided that I wouldn't be repeating the question later to le patron.

Back in 1988 when I first came to Tulum there was nothing here other than what the Maya had left behind. Nowadays there's a 10 km row of boutique beach huts along what is probably the Yucatan's most perfect stretch of white-sand beaches.

Anyone that knows me will know that, in Spanish-speaking lands at least, smart little hotels run by smug foreigners that speak the language rather less well than I can, are not really my thing; But I will make an exception here. For a start the restaurant is superb. Wherever you stay here the only place to eat is the hotel's own dining room, so it's a very important aspect of choosing where to sling your hammock, so to speak.

I made the mistake of asking the the chap that carried my bags to my room what was on the menu tonight and he went off on a long discourse involving a multitude of unusual local ingredients. Of course when I got to the table later I could hardly remember any of them and when he appeared again as my waiter with a stern "Ya se lo dije" (I've already told you...) sort of look, I opted for "the fish". This turned out to be an excellent choice: Boquinete entero a la plancha with a sauce based on a local dry chile called Guajillo. (Boquinete is what the Belizeans call "Ssnappaaar!". )

It really is so nice here that I almost can't be bothered to go and see the ruins again this afternoon. But I will take this sudden onset of perezitis agudo as a good sign.

There was an uptight American intellectual type on the bus last night. He might just as well have been wearing an "I'm an anthropologist not a tourist, OK?" t-shirt. I had an hour of schadenfreude watching him sitting next to a woman with two howling brats on her lap. It got better still when the cholo standing beside his seat leaned over him whilst playing a racing game on his SONY PSP at full volume. In contrast all I had to distract me were two young Maya learning German en voz alta right behind me. "Orale...Ich heisse.."

Mobile phone update: apparently if I take the stairs up to the high terrace I might get a signal. Using the Chocolate phone when your hands are sticky with factor 30 is quite a challenge. It gives new meaning to the term slider and the touch sensitive buttons on the front panel just aren't any more.
Posted by Inner Diablog at 3:10 pm

Anything much in the way of gear? Would love a shirt and pair of those espadrils jah. ;o)

We do read your blog :-)
Can you call me please?
Joel