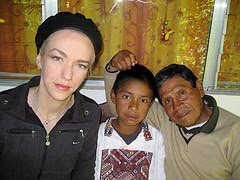 Boing Boing's co-editor Xeni Jardin has been trekking in Guatemala and posting to her online journal, as temperatures in the highlands have plumetted to their lowest in 15 years.

Last weekend she took a trip to the lower-lying north. I remember the days when I used to call the Petén "the jungle" too: it does make one sound so very adventurous. It's actually a seasonal tropical forest, sadly not even wet enough to be a proper rainforest! Oh well...it does have big cats and posionous snakes and stuff.

She's been there while the Volcán De Fuego (3763m) had one of its seasonal fits of serial belching (V's younger sister lives in Yepocapa), and as 18 died in the market fire at La Terminal; She's filmed men playing marimba and women making tortillas and reported on the wave of femicides with the new angle of attacks on transgendered and transvestite individuals.

She has also noted the relatively radical nature of spectrum reforms over there, where bandwith is assigned as personal property with legal title: "In 10 years, Guatemala has granted almost 4,000 TUFs, including 590 to amateurs. Although it is among the poorest of Latin American countries (with GDP of $1,500 U.S. per capita), it possesses the highest quantity of spectrum for wireless communication: 140.0 megahertz."
Posted by Inner Diablog at 9:15 am