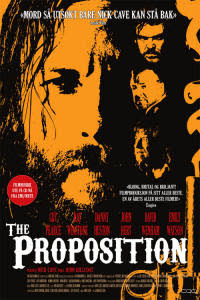 This misanthropic outback 'western' was penned by Australian musician Nick Cave. It grabs and holds your attention from the superbly realised firefight at the start.

Stanley takes a gamble. He knows that Charlie has split from the 'family' gang headed up by his elder brother Arthur (Danny Huston), that has been raping and murdering genteel English settlers. He proposes that Charlie can have a pardon if he hunts down and kills Arthur...otherwise Mikey will be hanged on Christmas Day.

The trouble is that most of the characters are there solely to stand for something. For example, Stanley's wife Martha and his boss Eden Fletcher stand for everything the Australians dislike about us Poms. Only the Captain himself has anything like a personal pyschological narrative within this inexorable plot. You might say the same of Clint Eastwood's movies, but these always had both the underlying mythology of the American West and the overlying one of the unnamed (and increasingly fantasmal) lone-riding gunman to provide some meaning to events on screen.

There appears to be no reason behind the Burns gang's campaign of brutality, other than the fact that they are Irish − "niggers turned inside out" according to John Hurt's craggy bounty hunter Jellon Lamb (an excellent cameo - a kind of Gandalf from Hell) They are there in this wilderness, detached from both the civilised and the uncivilised, as agents of a kind of cosmic barbarism. While everyone else is hateful, they are simply implacable.
Posted by Inner Diablog at 10:46 am