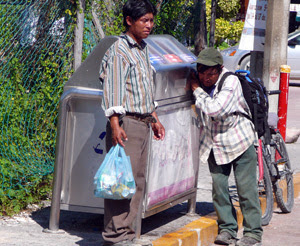 It's the the end of a long Sunday soaking up the sun's rays and the spirit-warming hedonistic vibes of the Mayan Riviera.

There's nothing quite like this in Guate. Down there there's a certain amount of honest grot wherever you look, an attention-grabbing lack of uncorrupted artifice.

But here you are in Vacation World; an ersatz gringo playground. And if you are not part of it you are in a way forced to act like a cockroach scurrying out from the cracks whenever opportunity permits.

V reck0ns that one reason that there are no recycling bins in Antigua is that there are loads of 'unofficial' recyclers on the prowl. You have only to drop that Coke can in the dust and not long afterwards some hungry fingers have whisked it up into a carrier bag. Well this pic shows what happens in Vacation World, which of course must keep up the pretence of local adherence to First World mores - open war between unofficial recyclers and the municipal recycling bin. I passed this one three times at different stages of the day today and each time it looked as if it was eating a man's arm.

I'd been up for 24 hrs when I called it a night at the Blue Parrot last night - midnight - not late enough to observe the women on the ground beneath the bar's swing seats sifting through the sand in the hope of finding a 5 peso coin...

The B.P is pretty much all that's left of "old Playa", that hip, rather Bohemian stretch of palapa-style hotels and bars that sat on the white sand between the two piers. It looks like Wilma gave the developers a bit of a head start, but beach-front property aside, there's little to support the mayor's assertion the day after the hurricane struck that Playa had been "destroyed". I hadn't been expecting to see the towering palapa of Madre Tierra, but there it was, and now here I am in the Zoo cybercafe underneath it.

Earlier in the day I watched West Ham play Manchester United in this same bar. One of the two Argie commentators on FOX started singing (to an imaginary hard rock beat) when Rio-Coker scored, and then didn't really stop. Simon Cowell would have been sitting with his arms folded, smiling knowingly. Talking of Argies, "gwess-hum" won because they didn't play that pair of hopelessly slack economic migrants Tevez and 'Rasca-ano'.

I get more smiles here when I don't roll out my colloquial Central American Spanish. It tends to throw them a bit. Firstly, they don't really like Guatemalans, and secondly it spanners their whole "hey amigo" patter. Still, they are an impressively industrious lot these Yucatec Maya.

I don't know another place in the world with such a concentration of opportunities to buy things you don't really want or need - including stuff that nobody could need, not here at least. What's with the surf boards? Are you supposed to wander up La Quinta with this fetishistic lifetsyle symbol under your arm, occasionally taking out a Mariachi with a deft side-swipe? It's no use in the Caribbean Sea for sure, the waves just aren't gnarly enough.

Actually, there is one useful item on sale here: Indonesian sarongs. V has bought loads over the years and I offered to add to her collection yesterday, but she has more than she knows what to do with, she told me last night.

And my bags have a lot more Habanero sauce in them now than when I arrived. Melinda's.

Blogger.com has gone all "no maaanches" on me - it seems to know that I have plugged into a local area network in Mexico and has displayed all the menus in Spanish.

Anyway, it's almost time to catch a bus that will take me another 50kms or so further south to Las Ranitas. If there's wireless there I may get in another post before Belize.
Posted by Inner Diablog at 10:39 pm

excellent post--thanks for the update. You had me laughing...