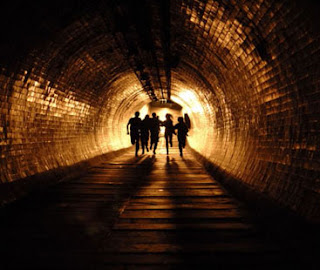 If you wanted to rebuild British civilisation London E14 wouldn't be the most obvious seeding point, but hey, it's my own neighbourhood, so I just had to go and see this entertaining sequel to 28 Days Later.

And so I had the pleasure last night of watching Canary Wharf (and by implication the cinema I was in) getting so badly bombed by the USAF that the resulting fireball surges all the way down the Greenwich Foot Tunnel and lights up the face of the statue of General James Wolfe which overlooks the Isle of Dogs from its high vantage point across the Thames.

In some ways Poplar was the ideal location as it really does look that grimy and apocalyptic almost every morning. All they had to do was shoo away the resident zombies (more the shuffling sort) for that realistic forsaken inner city look.

Alex Garland freely admits that his original concept was inspired by John Wyndham's The Day of the Triffids. Garland and Boyle have stepped aside here to allow Canary Islander Juan Carlos Fresnadillo, director of the excellent Intacto, to move us on to the period twenty-eight weeks after Cillian Murphy had traversed a deserted Westminster Bridge, a time when the rage virus appears to have spent itself out and an American-led expeditionary force is trying to repopulate London from within a secure 'Green Zone'. (The political subtext is obvious without being especially informative.) The Yanks have orders to go code red if the sickness resurges (or in-surges!) within the protected area, which of course it does.

The rage-plaguers defy the rule that says that sick people are debilitated. Turbo Zombies is how Paul Arendt has described them, while Mark Kermode, an acknowledged authority on the subject, insists that they can't be proper zombies because they don't actually die before the sudden change in their dietary habits. Fresnadillo handles the transformation of a leading character into one of these ultra-peckish types very well, but for most of the movie they seem to be moving too fast for him and his camera to keep up with them.

Aside from the camera jitter, the film's other faults include the fact that the occupying Americans are massively under-staffed compared to say one of Zhang Yimou's Chinese hordes and the general lack of character development, but in spite of all that I really enjoyed it, perhaps even more so than the obviously subtler and smarter original.

It also features the ever lovely-but-doomed Rose Byrne. There's a sad quality to her beauty which has resulted in her being consistently hired to play characters whose destinies don't work out especially well. (And as it was in Sunshine, her final moments here are rather hard to track.)