Bangs for your buck 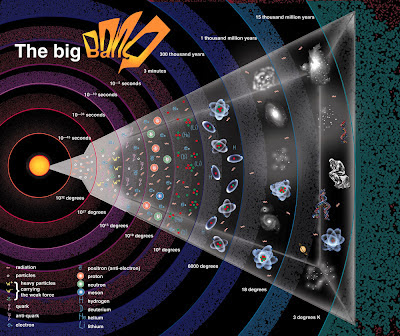 Marcus Chown (many thanks for your comment on my earlier post!) references Douglas Adams's remark about parallel universes being neither parallel nor universes, which reminded me that there's a similar quote out there about the Big Bang being neither big nor indeed a bang.

Indeed it seems it wasn't so much an explosion of stuff into space as a rapid expansion of space and time, which just happened to have stuff it it. If we could take an escalator up to the next dimension in order to watch the expansion of our 3D universe, it would appear like the inflating 2D surface of a balloon. It's no doubt a very important event in the history of our local universe, but it may just be that, a local event, and it almost certainly wasn't the first thing that ever happened.

Scientists used to argue about whether gravity would eventually regain the upper hand and our universe would reach the end of the tape and start rewinding all the way back to a Big Crunch. There's a chapter in The Never-ending Days of Being Dead entitled Yo Yo Universe (the Spanish translation is interesting) that explores the ideas of Paul Steinhardt and Neil Turok, whose cyclic model of how the universe swells, shows how Big Bangs might be able to keep on repeating like Groundhog Day, without the need for a radical contraction of all the matter the universe contains.

I've just finished the chapter after that, Keeping it Real, in which Marus Chown points out that although most scientists habitually only fret about reconciling General Relativity and Quantum Theory in the long past cosmological era when things could be both tiny and massive, the truth is that all the atoms in our bodies (and all other macroscopic objects) are at this very moment behaving weirdly, regardless of our own constant efforts to appear normal.

We can never directly experience the indeterminate world, because there are simply too many atoms in our immediate vicinity; conditions in which the wave function, which we can witness only as an interference pattern, decoheres within around a ten millionth trillionth of a second. But a being able to somehow isolate itself from all the particles around it, could be in two places at once, no trouble.
Posted by Inner Diablog at 2:08 am