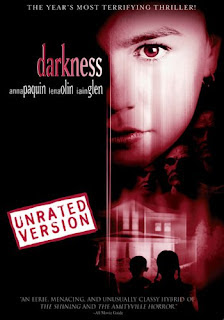 This was Jaume Balagueró's follow-up to Los Sin Nombre, using Hollywood-based actors and funding, and it's definitely more derivative drag than thrill-filled homage!

The Shining gets the rip-off treatment more than any other precursor, but Balagueró is also revisiting the conceit of his earlier film: that pure evil can be conjured out of medical-occult experiments involving domestic murder.

Here though he has failed to create characters we can really care about, or to put them in situations that are genuinely chilling.

The performances of the non-anglophone actors are especially stiff, and it's clear that the script was also put together by men with a late-learned grasp of English.
Posted by Inner Diablog at 12:29 pm