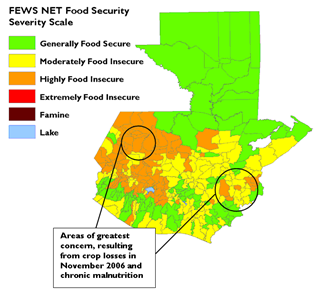 Reuters/Alertnet have an interesting report today on Guatemala's hunger season, which may be felt especially hard in certain rural communities this year due to high grain prices, low grain yields, low demand for unskilled labour, a lack of wild fruit, and the presumed affects of El Niño. (Though it seemed to me in April that the wet season was actually starting early in 2007.)

The map inset could be taken to indicate just how bad the people living around Lake Atitlán are at fishing.

The report doesn't mention the significant rise in Guatemala's exports (24.4% in the first two months of this year), which could of course mean that more of the edibles have been heading out of the country.

The chart below provides a more complex perspective on Guatemala's seasons. I was out there last July for the la canícula − literally the dog days − which coincided with the latter stages of the World Cup. It's really the only time that the country gets a full head-on blast from the northern hemisphere's summer.

Posted by Inner Diablog at 9:36 am