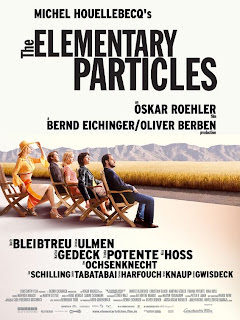 Peter Bradshaw really didn't enjoy this: "A film so embarrassingly awful I felt like putting a brown paper bag over my head...this is as dead as a haddock on a slab."

Yes, you might say that Oskar Röhler's movie is as far away from Houellebecq's novel as your average German entry at the Eurovision Song Contest is from the UK charts and pop credibility in general, but in some ways the switch across to the other side of the Rhine does actually work (hippies, swingers parties etc.).

Yet the French author's acerbic wit (and his pornographic sensibilities) have been supplanted with a rather mawkish realisation of his outstandingly stinging interpretation of the modern male condition; the poster inset suggesting that Röhler perhaps went off in search of Houellebecq's inner-Hopper.

The trouble is that New Age holiday camps are nowhere near as inherently hilarious in 'real life' as they are as described by one of Houellebecq's narrators.

Bruno is the only character that seems able to survive on his own two feet outside the mind of his creator. Christian has become relatively pointless in this restructuring of the half-brothers' tale, and the script only serves to emphasise just how bad Houllebecq is at autonomous females. And it seems that in the end Röhler couldn't face leading Franka Potente's Annabelle through to her own dismal euthanasia.
Posted by Inner Diablog at 6:56 am