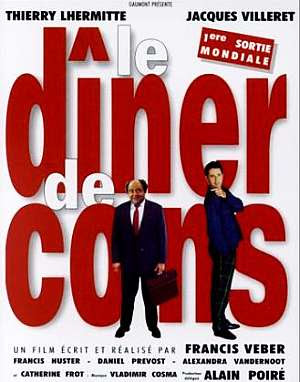 I haven't laughed so much in ages. I guess the silliness of French comedy strongly appeals to me. I found Les Visiteurs hilarious. Even Monsieur Hulot's holiday gets me sniggering.

This one started out as a stage play, written by Francis Veber, co-scripter of La Cage Aux Folles and has the structure of a classic French farce.

The dinner in the title never actually happens. It is weekly event organised by publisher Pierre Brochant and his smug, affluent chums. Each one has to find an idiot to bring along who can then talk about their lives and consuming passions, be they boomerangs or match-stick models, for the general amusement of their cruel sponsors.

Pierre has located his idiot for the upcoming dinner through a trusted source, but by the time the well intentioned but maladroit government official Monsieur Pignon (played by the late Jacques Villeret) arrives at his swish Parisian pad, Pierre is having acute back and marriage problems.

The comic situations branch out thick and fast as Pignon decides to stick around and make himself useful. (In fact you are left with the feeling that there were more such situations latent in the scenario than Veber was actually able to fit in.)

If there's one particular silly moment that I will cherish it is when Pierre pours vinegar into the Chateau Lafite he is about to serve to an unexpected guest, a tax inspector, and at first discovers that the newly fashioned petit vin has a bit more body than it had before.

It's nearly ten years old and there's still no sign of a Hollywood remake. This may not be a bad thing as Veber himself would like it to be a Robin Williams vehicle.
Posted by Inner Diablog at 9:33 pm