You gotta fight for your right...to party 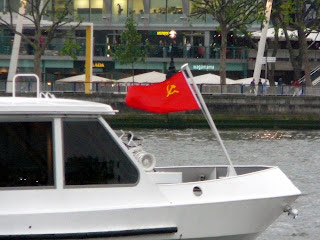 Some arsehole obviously thought it would be a really good wheeze to throw a corporate 'communist party' on the The Silver Sturgeon last week. Convention dictates that we find this less offensive than the Nazi Reichskriegsflagge. But tot up the number of lives ruined by both systems and it's more or less even-steven.

I'm sure this image would resonate nicely with Joseph Heath and Andrew Potter, authors of The Rebel Sell: How the counterculture became consumer culture, which I will be reviewing shortly.
Posted by Inner Diablog at 1:51 pm