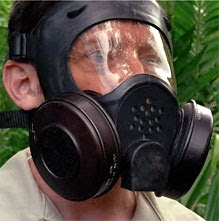 In a move that was possibly designed to be heartening, the makers of Lost have announced that there will be three more full seasons before the series closes out in 2010. (I'm one of the saddos that hasn't missed a single episode.)

This news led me to suspect that many of the approximations to sense achieved over the course of Season Three have in fact been false dawns, but Wednesday night's show, The Man Behind the Curtain, was certainly a biggie, drawing in an extra 1m viewers stateside. It featured the long-awaited back-story of bug-eyed Ben and went some way to explaining the (unpleasant) fate of the Dharma initiative. Jacob has also been revealed, sort-of.
Posted by Inner Diablog at 11:42 am