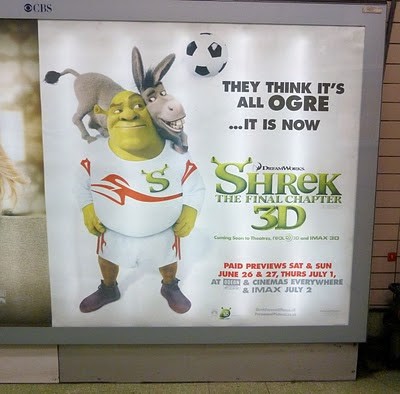 It's certainly all ogre now for any one with a football phobia.
V:"Ya me aburrió el futbol..." and we're only 45 minutes in. For some reason the opening match is often a big snore, but the hosts just scored, so maybe this one's about to wake up.
I thought the Tube poster above was a great example of localised marketing, although the gag might be lost on most of the movie's target audience, and many of the foreign visitors wandering around London.
I also noticed that Tesco is selling large Toshiba flat screen televisions with the promise that anybody who buys one will get their money back if England win the World Cup!
Could be costly for them, but should this highly unlikely event come to pass, they'll also benefit from the orgy of consumer self-indulgence which is almost certain to come in its wake across the southern portion of the British Isles.
Posted by Inner Diablog at 2:44 pm