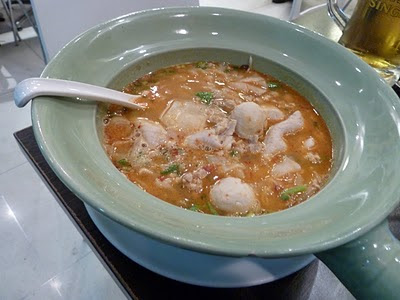 A bit of a foodie share this one. Having arrived at Bangkok's beautiful new airport deep into the government-imposed curfew, I decided that discretion was going to be the better part of valour and prepared myself for a night in the terminal's food courts.
Unlike Singapore's Changi, where the airport food is surprisingly dreadful, Suvarnabhumi offers a veritable emporium of Asian culinary delights. (Plus some Boots and Starbucks outlets for those who are that way inclined.)
I took up residence in one such eatery with my Netbook and ordered some 'spicy sour rice noodle with pork ball and ground pork', washing it down with a couple of jugs of Singha beer (served from what looked a bit like a Pret-a-Manger coffee machine).
Some very smart crockery this.
There were three American girls from Princeton at a nearby table who consumed so many litre bottles of Singha while they were there, that the restaurant staff gave them a box of chocolates after they'd settled their bill. 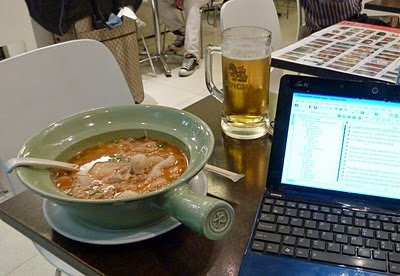 Posted by Inner Diablog at 3:21 pm