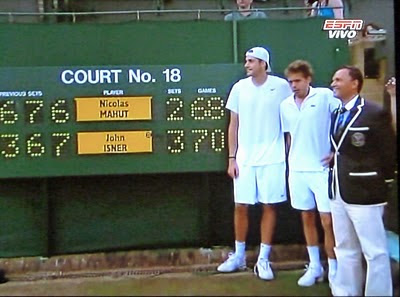 It finally came to an end this morning, having lasted 11 hours and 5 minutes; the fifth set alone went on for 491 minutes. Between them Isner and Mahut had served 215 aces.
Mahut looked a little distraught, but then Tim Henman appeared an handed him a commemorative prezzie in a fancily wrapped box. Isner also got one. (No Frenchman was available apparently. They must all be in hiding.)
It was the least the All England Club could do as this marathon encounter has given The Championships a higher profile at a time when everyone — except the H.M. the Queen apparently — would rather watch the footie.
I suspect that when Henman himself is long forgotten, they will be bringing this particular match and its stats up during the summer broadcasts.
Elizabeth II missed it as she'd had more than enough tennis watching Andy Murray in her first visit to SW19 at this time of year since her Silver Jubilee year of 1977.
Meanwhile, I have decided to watch all future World Cup matches shown by ITV on their live online feed as I am getting pretty fed up with some of the Guatemalan commentators, especially that jowly one who uses the term la zaga every few seconds.
. 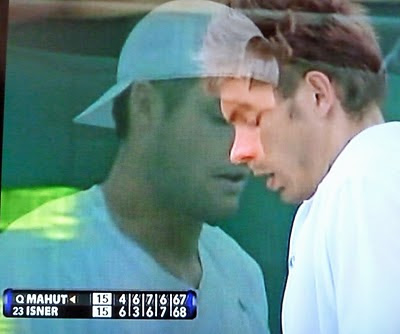 Posted by Inner Diablog at 5:07 pm