Sometimes, no matter how hard one tries, it seems impossible to capture the essential experience of being in a place using a digital camera. 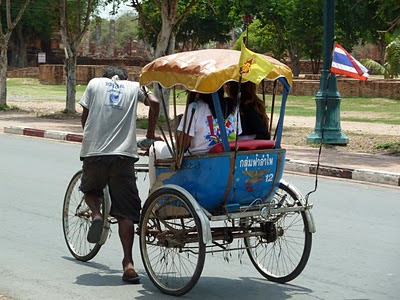 Such, I have found, was the case with Nikkō, the most affecting location I visited in Japan. In the case of Thailand however, I've discovered more fascination in my photographic review than I recall actually encountering on the road; the afterglow has been more pleasurable than the glow, so to speak.
And what a glow it was. I felt completely irradiated as I traipsed around Ayutthaya, Thailand's ancient capital. Never have I experienced such intense calor.
Heat and humidity aside, there are perhaps other reasons why I was less than 100% engaged with the pleasure of the trip at this stage. Apart from Vancouver, where my sojourn was brief, Thailand was the only destination where I lacked a local friend to show me around a bit.
I'd been on the road for quite a while too, and would probably have been pidiendo pelo even if I didn't feel in constant danger of shedding my entire moisture content.
The political crisis was a mixed blessing. As I had suspected, such moments are often the best times to put in an appearance — the general absence of other foreign visitors at some of the key sites meant that I often had them basically to myself. But then every guide, every hawker and every tuctuc pilot was after a piece of my action, and I found myself having to take evasive action on numerous occasions. This was the only developing country on my itinerary and I felt very much back in pushitero-land.
These ones in the pic below were easy enough to sneak past. The intense heat was even getting to the locals it seems. Their colleague above got lucky however with these two young, middle-class Thai girls. 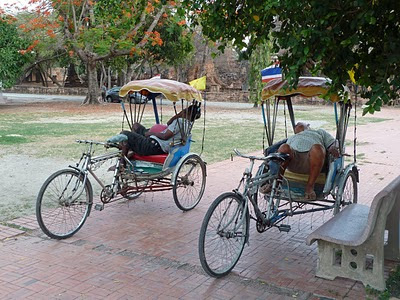 Posted by Inner Diablog at 2:43 pm