One of the finest things about Vancouver was this little street stall selling Japanese-style hotdogs made with shrimp sausages, red peppers and chile sauce. I found it outside the Canadian Pacific Railway building and also spotted the final touches being put to the second permanent Japadog restaurant in the city.

They're run by the husband and wife team of Noriki and Misa Tamura and they gained a lot of buzz with the Japanese media during the recent Winter Olympics. My fellow snackers (below) were commenting that if there was one business in Vancouver they'd like shares in, this would be it! 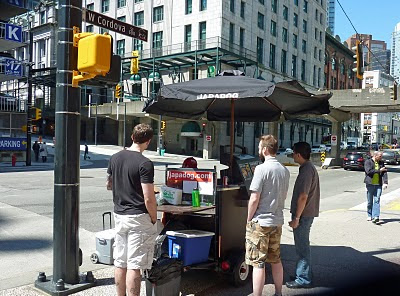