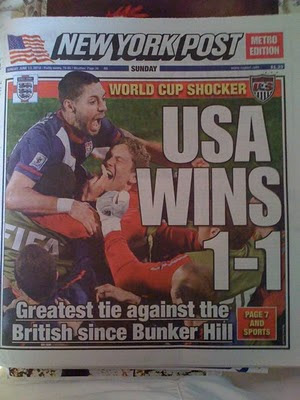 Not a bad result on paper, but it was always going to be more agreeable to American (and Scottish) people.

Expectations for our national team have been much lower at this Mundial, but we were all hoping not to have them met quite so quickly. The problem was that all the known weaknesses of the squad, which we'd kind of hoped would miraculously vanish the moment the competition started, were not only present, but present in near exaggerated form.

And to cap it all our formerly 'lucky general' has started to demonstrate the decision-making prowess of his predecessors.

Significantly, England (or indeed any other international squad) only seem to do well at the World Cup when their guardametas can post a reasonable claim to being the world's best.

Unfortunately, England's recent history on the pitch has been littered with the sort of goal-keeping clangers one tended to associate with our northern neighbours. It began with Seaman's gaffe in 2002. Then England failed to qualify for Euro 2008 largely due to spectacular penalty area cock-ups by Robinson and Carson in the home and away legs against Croatia. In came Robert Green...and like Seaman, Robinson and Carson, a single mistake may have brought down the curtain on his international career.

Yet the alternatives aren't great. There's an ageing David James (aka 'Calamity James') and the young and untested Joe Hart. Many did feel the latter deserved a shot at the No1 shirt in South Africa, but Capello stuck with the keeper he preferred in qualifying.

The one player in Team USA who would have made it into Capello's squad ahead of all of the alternatives was indeed their goalie, Tim Howard.

Aside from Landon Donovan there's hardly another player in the American first eleven who ought to have posed England major difficulties, yet a bloke who's having trouble breaking into the Hull first team helped make our expensive midfield look ragged.

Anyway, all we have to do now is perform better than the Yanks against the likes of Algeria and Slovenia to win the group....an absolute must it now seems, as the runners-up are likely to run into Germany: an option that looks increasingly unpleasant.

(Thanks to James for the pic!)
Posted by Inner Diablog at 2:32 pm