Technology to the rescue? 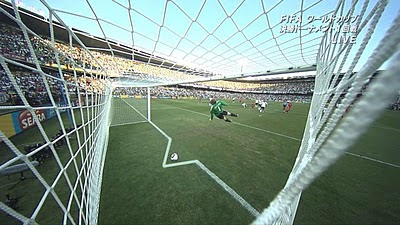 It's not really clear that the result in Bloemfontein would have been any different had Frank Lampard's equaliser been allowed to stand. If England had come on in the second half and not had to chase the game, they might not have resorted to a that suicidal Chilean-style formation with almost all ten outfield players stuck somehere between midfield and the German back line.
On the other hand, most English people are being realistic: our team were pants across all four matches in this World Cup, and would more than likely have still been suckered by the Germans' well-conceived tactic of defending very deep before racing out in deadly counter-attack.
In contrast Mexico were surely robbed last night by the team led by the man my Bulgarian friend calls the 'hairy meatball'.
He can't understand why they even bothered staying on the pitch after ugga-wugga caveman Carlos Tevez's blatantly offside header was replayed on the big screen (accidentally and against FIFA regulations it seems). For a moment the officials looked conscience-stricken, yet were still unable to right this wrong under the current rules of the game. Mexico had been bossing the play up until that point and quite obviously went to pieces after it.
Now I've said here that controversy is part of the habanero-munching nature of the pleasure of watching international football, but some of the decisions at this Mundial have been just so completely bizarre (USA's disallowed winner, Kaká's red card etc.) that the competence of FIFA to run a tournament of this size and significance has to questioned.
The Guardian's Sean Ingle described FIFA as "football's answer to the Amish, but without the killer beards." They ignored all the calls for decision-assisting technology after the Henry handball saw France qualify for this World Cup at the expense of Ireland. But with this level of renewed public interest in the issue, can Sep Blatter really hold out much longer?

One thing is clear however (and can be resolved quickly and without technological aid) Mick Jagger should be kept away from all future England and USA fixtures.
Of my favourites only Chile and Japan remain. The latter might just make it to the quarters with their super-skilled pin-up star Honda, but you have to fear for the temerarious Chileans against a fully-reinforced Brazil today. Half the Chilean team is missing too thanks to the equally swashbuckling efforts of the ref in their last match against Spain.
Posted by Inner Diablog at 1:15 pm