Blaine at the LG Shine Launch 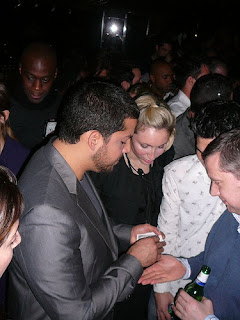 I had a great night out on Wednesday with my colleagues at Cirque, the nightclub formerly known as the London Hippodrome back in its 80s prime (which I once attended back in my own 80s prime: one of Eddie Davenport's Gatecrasher Balls.)

The occasion this time was the launch of LG's Shine, the second mobile phone in their Black Label Series.

David Blaine appeared in person during his public walkabout, and more sharp-edgedly as a projected holgram on stage.

Music-wise Indie group The Feeling were top of the bill.

Aside from the laid-back American man of magic and a few of our indigenous attention-seekers, Mohammed Al Fayed was there with his son Omar. I will post some short video clips I took over the next couple of days. (Meanwhile there are already some pics up on the LG Shine blog and the MoBlog.)

We were looking after a few bloggers that we had invited along. SMS Text News kept us informed and amused throughout the day (and in the aftermath) with his blow-by-blow coverage, including an exclusive interview with Cirque's backroom staff.

Everyone I spoke to seemed to be having a good time, but one of the invited guests in particular bad-mouthed the party the next day in the press. I know that the whole idea of these events is 'coverage' but I still think that if you have accepted someone's hospitality it remains very impolite to rubbish it in public afterwards. It would be a bit like me going to dinner at someone's home and then blogging about how crap their cooking is the next day! Personally I only slag off food and drink I have paid for! Media people are just a bit too spoiled these days.

Anyway, the main selling point of the Shine is it's mirror-like LCD display. I wonder whether we will soon see flat screen TVs using this technology on a larger scale. (Perhaps too reflective...)
Posted by Inner Diablog at 5:21 pm