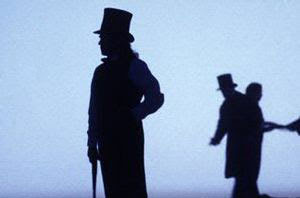 An interesting experience all round. I haven't before sat watching a screen next to people with blankets over their legs anywhere that wasn't at least 35,000 feet up in the air.

But this was The Metropolitan Opera, live via satellite in HD at the Greenwich Picture House. Such moviecasts are "a new art form," according to the LA Times.

Tchaikovsky's opera derives of course from Pushkin's verse novel, for me the definitive work of Russian literature, and one of those books that made a very great impression on me back in my school days. It's sadder than all of Shakespeare's tragedies put together.

Essentially it tells the story of a puffed up and dissipated trustifarian type that turns up in Hicksville on the Steppes and coldly tells an ingenuous young admirer to get a grip, only to later lose it himself when he spots her transformed into a dazzling trophy wife at court. The country girl can now match him in worldliness, but unlike other great heroines of nineteenth century literature, she shies away from adultery.

It was in the front row too that I saw Ralph Fiennes' uninspired cinematic version of the story with Christofer; he would never sit anywhere else. This time it was not a matter of choice but I had a plush reclining seat with plenty of legroom, so I wasn't looking or feeling as awkward and cantankerous as some of the people around me. We complain a lot about our teenagers in this country but it strikes me that our wrinklies are as quick to assume and profer offense as any hoodie on the highstreet. The amount of pushing and shoving that went on in front of the entrance to screen #1 reminded me of boarding an aeroplane with a bunch of Guatemalans. These are the people that keep me out of museums on Sunday afternoons.

The close up camerawork amplified a couple of the weaknesses of this production, uncluttered (i.e. sparse) sets and over-ripened cast members. Elena Zaremba as Olga in particular, is no spring chicken. "Good, but old" pronounced one of the whittering blue-rinse brigade behind me when she came to do her curtain call.

The conductor was the wayward-haired Russian Valery Gergiev who looks like he might have studied at the Chernobyl conservatory. His compatriot Dmitri Hvorostovsky makes an eminent Evgeny, though this time I noticed how little Tchaikovsky sets up the character in the first act. In truth this opera really ought to have been called Tatiana. I've also always felt that the real tragic hero of the piece is Lenski, and the Russian composer certainly gives mediocre man of verse the choice of the tunes, a beautiful duet with Olga and then a plaintive swansong before the duel. Ramón Vargas, a Mexican bel-canto specialist, worked his culito off to master Russian, and was a revelation in the role. Larisa Shevchenko is also superb as Tanya's nanny.

I was last at the Met for real in January 1989 with my then (American) girlfriend for the The Marriage of Figaro, which turned out to be a bit of a snore. I last saw Eugene Onegin live with Thomas Allen at Covent Garden a couple of years before that, and much appreciated the stageing of the duel scene, which included gently falling snowflakes.

When I arrived tonight my front row seat afforded me an excellent position for soaking up the singing of three young sopranos standing in front of the screen with their stiff dresses and flabby upper arms. They frumped their way through primary school classics of the English folk tradition as "Oh no, John no John no".

I later made my way to the exit reflecting on whether today's teens could be capable of evolving to replenish the ranks of the crabby sophisticates I left shouting "bravo" at the 2D screen. They probably do the same thing whenever Des O'Connor appears on their tellies.
Posted by Inner Diablog at 10:23 pm