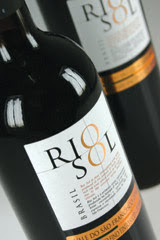 Waitrose has started stocking a Brazilian wine called Rio Sol (Cabernet Shiraz) produced in the city of Petrolina, which is in the middle of the sertão (drylands) of the northeastern state of Pernambuco. The label on the bottle celebrates it as the first example of a wine produced in the challenging latitudes of 8 degrees south.

It's very delicious, and whilst Brazilmag enthuses that Rio Sol is "now greatly appreciated by the guests at the Burj Al Arab, the most starred hotel in Dubai in the United Arab Emirates," here in London it is going for a **** price: £4.99.

It's also nicely alcoholic thanks to the tropical sun that blazes over the vines down there. (The Telegraph had a piece last month about the vineyard.)

Waitrose also stocks a fairly decent Mexican wine (from Baja California) produced by the L.A. Cetto company.
Posted by Inner Diablog at 10:46 am