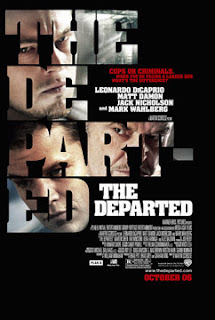 Fans of Infernal Affairs will inevitably have some misgivings about Martin Scorcese's remake.

Yet it pulls you along like one of those permanently enthusiastic friends that goads you into turning up at a party you never really wanted to go to...and you end up having a good time in spite of yourself.

The script fizzes. That and the development of character are Scorcese's main developments of his Asian source, but these aren't exclusively enlargements of it. Nicholson is often out of control and the rendering of DiCaprio and Damon's roles actually detracts from what I personally take to be the meaning of the story. The police mole is a bit too likeable and the gangster mole is a bit too un-likeable; The interesting symmetries between the police inspector and the gang-leader are also lost, as well as the sense that we are witnessing a conflict between two competing codes of honour.

There was a pathos about the inverted situations of the two men in the Hong Kong thriller that Scorcese simply doesn't capture. In spite of all of DiCaprio's best efforts I never really felt especially sorry for Costigan and Sullivan's actions are blandly self-serving. You never have the sense that he subconsciously yearns to become one of the good guys.

Infernal Affairs had a certain epic quality, underscored by the Buddhist ruminations on the torments of the betrayer which flash on the screen at the beginning and the end. It's one reason why the underlying structure of the story was able to support a trilogy. Scorcese on the other hand needs to wrap things up in 150 minutes, so he is forced to tell us everything we need to know about his two leads in the first twenty minutes or so, and then to insert a rather artificial ending, courtesy of a new main character of William Monahan's creation. (Mark Wahlberg's Dignam, otherwise there to gas up the dialogue.)

Alec Baldwin's hammy performance (something of a reprise of his movie star from Notting Hill) is actually more amusing than Jack's. And the film actually ends on a strange note of comedy as we see a rat making its way across Boston's rooftops from the window of Sullivan's overstretched ambitions.

It was a nice touch to have the pair share the same shrink, and to suggest that Sullivan was altogether less cocky in the bedroom.

Anyway, give the man his Oscar I say!
Posted by Inner Diablog at 10:40 am