Brokeback to Murderer, do you copy, over? 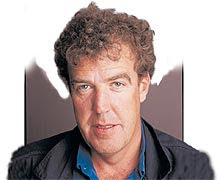 Such were the stand-out passing remarks made by Jeremy Clarkson on this week's Top Gear, which chronicled his and his two mates' road trip from Florida to Louisiana, which began with them attempting to buy a car in Miami for $1000 − in other words for less than the average fly-drive rental deal.

Had Clarkson chosen to visit and offend the local population of a more sensitive, less individualistic nation than the United States ,we might now be facing yet another major international diplomatic incident, and he himself would be surely be helping police with their enquiries much like Jade Goody was last month.

The trio did manage to rub up against some geographically-localised sensitivities in Alabama. Stopping for gas with their vehicles festooned with provocative slogans like NASCAR sucks, Hillary Clinton for President and Man-love rules (in lurid pink paint), they were treated to some deeply-felt southern dialect by the lady in charge of the service station, who then spun round and stomped off having threatened to "call the boys". Moments later a pick-up bearing the said young men arrived. They duly alighted and proceeded to hurl rocks at the BBC presenters and their crew who were by then frantically trying to jump-start James May's $1000 '88 Cadilllac.

If the rednecks don't sue, the vegetarians might. At one stage the team were set the challenge of limiting their diet to anything they found (dead) beside the road. Hammond was just about to barbecue a − mostly-intact − squirrel when Clarkson turned up with an enormous dead cow draped across the roof (windscreen and bonnet) of his Chevy Camaro.

It all made for hilarious television and can be downloaded here at TvTorrents. There was ample evidence that there's plenty of room for Clarkson in the documentary niche currently occupied by Borat and Michael Moore.

His insistence that Miami is a township of murderers encouraged me to check the facts online. There are in fact some 70 homicides a year in Miami, a city of roughly 350,000 people, compared to around 150 in London, a city of roughly 10 million. So London has 30 times the population, but only twice the number of murders.

A single season of CSI:Miami seems to account for most of the 70 murders allocated to the swankiest town in 'God's waiting room'. That show also seems to indicate that the majority of the violently-deceased are affluent, under-30 and unencumbered by close friends and family.
Posted by Inner Diablog at 8:15 pm