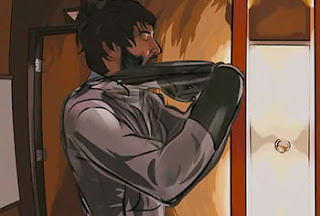 "The most dangerous kind of person is the one who is afraid of his own shadow."

"What is that supposed to meeeeean?"

That little snippet of dialogue more or less sums up the tenor of this movie, which in spite of its tendency to babble and drool, managed to get under my skin (to much the same extent that Waking Life got up my nose.) And it's worth seeing for the scramble suit effect alone.

Close attention to either the plot, the dialogue or the dazzling digital-rotoscope animation is likely to leave your brain as frazzled as the Substance D dependents depicted here.

If Philip K. Dick's original story was about anything, it was probably a representation of his own state of mind. He was after all so convinced that he was under surveillance that he started keeping tabs on himself.

Woody Harrelson's character Ernie Luckman is granted some of the more lucidly comic bits of the script, including a monologue about a world-famous imposter who turned out to be simply posing as such, which includes a great line about Leonardo de Caprio before he "hit his Elvis stage."