A History of Violence 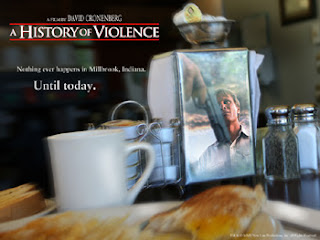 Joël recommended this one to me and I'm glad he did.

Based on a graphic novel, the action takes place against a knowingly-familiar tableau. (Which reminded me a bit of those made -for-TV movies that play on Living on weekday afternoons) A nice town with self-consciously nice inhabitants is suddently visited upon by some pretty pestilential east coast villains.

Tom Stall, a man seemingly gifted with the luckiest of lifestyles in all Indiana, is thrown into the media spotlight after defending his friendly diner against a pair of transient mass murderers. Shortly afterwards some mobsters from Philly come to Millbrook to look him up, claiming that Tom is really Joey Cusack, a misplaced member of their social circle.

Viggo Mortensen plays Stall with just the right amount of impassivity. It's a bit of a tightrope act because he has to preserve our compassion as the body count around him mounts. Mortensen is perfect in the role because he combines a air of disarming boyish innocence with the ability to look worryingly malignant with the flick of his smile. He does hollow-eyed pretty well too.

Overall it's a very well cast movie. William Hurt and Maria Bello are both excellent. So is Ashton Holmes as Jack.

I liked the way that David Cronenberg appeared to be establishing the two guys we see outside a motel at the start as key members of his narrative, only to dispense with them fairly sharpish shortly afterwards. The director makes us sit back and enjoy the way certain kinds of dispute are best settled with violence, whilst he encourages us to reflect on why this is so. "I am a complete Darwinian," he has commented.

The story does have its shortcomings. One has to wonder what prevented Carl Fogarty (Ed Harris in Men in Black mode) from being a bit more direct in his approach. His exchanges with Stall somehow don't ring true. Fogarty doesn't seem to behave as if Stall were really Cusack and Stall doesn't act as if he might have had some (serious) previous with Fogarty. Based on what I was seeing, at times I did find it hard to really believe that Stall might himself have come to believe his own story so completely.
Posted by Inner Diablog at 12:06 pm