Pots and kettles in Soho Square 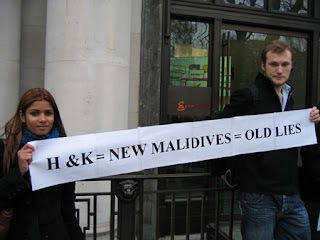 Protestors outside our building in Soho Square this week. I now feel encouraged to stage my own little vigil outside the Gwatemalean embassy.

The group that threw together this particular bit of counter-PR reported that “Positive comments were given to the protestors by people from neighbouring offices who said [H& K] deserve the protest for being so greedy”.

Interesting. H&K's neighbours in the square include the Catholic Church and the Football Association, not to mention 21st Century Fox and other UK representatives of the global film and entertainment industy.
Posted by Inner Diablog at 9:06 pm

Perhaps protest is an invitation to communicate; an opportunity to dissolve closure.