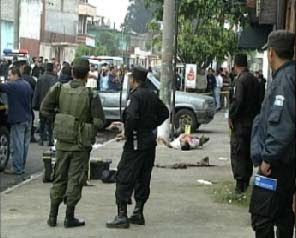 Yesterday when I mentioned to Scott that Guatemala's marriage rate doubles on February 14, he speculated on what might happen to the murder rate.

Sure enough, it has been reported today that six men ended up dead outside the same nightspot in Guatemala City on Wednesday night (a brothel located on 13 avenida, between 9ª, y 10ª calles), including a young recently-graduated publicista. Hundreds of expended cartridges lay on the pavement around the bodies.

I watched the very first episode of CSI:Miami last night. Horatio Caine had yet to acquire the mannerism of talking to people with his head listing 45 degrees to starboard, but he did manage to take off and replace his sunglasses twice during one conversation in the Florida Everglades. In the background someone shouted "we've got a floater!"
Posted by Inner Diablog at 3:28 pm