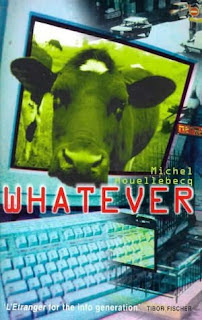 'L'Etranger for the info generation', according to Tibor Fisher. "The tale of an unhappy Frenchman, decently though darkly done," according to the Complete Review.

I was looking for my copy of Camus' much-brandished novel the other day, but when V started quoting bits back at me on the phone, I realised that I must have left it in the downstairs loo in Antigua!

A compare and contrast exercise does seem to recommend itself.

Both Mersault and Houllebecq's narrator − an information technology professional whose belief that he is nicely adapted to a life of vacuity proves to be wildly optimistic (for the sake of brevity in this post let's call him Loïc) − are young men mired in indifference. And it is the ebb and flow of their of moral indifference that gives these stories their particular edge.

An act of violence on an otherwise deserted beach becomes the key moment in both novels. Mersault's just happens because the weather had taken shape that day in a particular way. Loïc's is pre-conceived, and fails to happen because his chosen proxy lacks the necessary psychotic buzz about him.

Whereas Mersault maintains a stance of genuine indifference even to the full consequences of his own indifference (in spite of the determination of the state to make him suffer for it) Loïc's rather more obvious existential discomfort involves a good deal of sobbing and vomiting as the gradient of his decline steepens.

Compared to the novels that followed it Whatever goes easier on the caustic humour and has not a single pornographic sex scene to speak of. (Which may explain why the story doesn't quite achieve climax itself.)

There's nothing in there that made me chuckle quite as much as Nicholas Lezard's review in the Guardian: "The book slips down easily like a bad oyster...it's a sly drawing pin placed under your bottom in the Spirit Zone of the Millennium Dome". (Though I did like the episode when Loïc tells a psychologist that it's not so much that he is feeling down, it's just that "the world about me appears high".)

Like later Houellebecq mouthpieces, Loïc appears to harbour nostalgic yearnings for an old-fashioned kind of Love, which has been undermined at the societal level by sexual liberalisation (which "leads to the phenomenon of absolute pauperization", rather like its economic equivalent), and on the more personal level by his having generally missed the boat.

"Desire itself disappears, only jealousy and fear remain...one becomes less
seductive and on that account bitter."

At odds with both enterprise and consumer culture, his lifestyle is one of prolonged tedium leading "to feelings that are acutely more painful..in general I see nobody at the weekends. I stay at home, do a bit of tidying. I get gently depressed." (Hmm. This sounds a bit too familiar right now...)

At first he seems to have some amusing coping mechanisms, like reporting his lost car as stolen, because "saying that you've lost your car is tantamount to being struck off the social register." Yet a ill-fated training exercise in the provinces soon has him convinced that the time for trying to hold it all together has definitively passed:

"For years I have been walking alongside a phantom who looks like me and who lives in a theoretical paradise strictly related to the world. I've long believed that it was up to me to become one with this phantom. This is done with."

Pyschoanalysts and dentists are singled out for tour-de-force tirades. Of the former he observes that "a ruthless school of egoism, psychoanalysis cynically lays into decent, slightly fucked-up young women and transforms them into scumbags of such delirious egocentrism as to warrant nothing but well-earned contempt...a woman fallen into the hands of the pyschoanalysts becomes absolutely unfit for use."And that the latter are "exceedingly venal creatures whose only goal in life is to wrench out the most teeth possible and buy themselves a Mercedes with a sun-roof."

He also sneers at the people in his own industry that believe in the inherent value of extending the volume and flow of information, and "that freedom is nothing other than the possibility of establishing various interconnections between individuals, projects, organisations, services." This makes him a rather intriguing sort of modern heretic.

For the first fifty pages or so it struck me that this novel was revealing to me a younger, more compassionate author, still just about keeping pace with his own shadow. He even has some kindish words for the opposite sex: ("A prick can always be cut off but how do you forget the emptiness of a vagina.?") Darkness − and to some extent dullness − then descends on the punchline-free final act, the promising office satire having petered out around the halfway mark.

It's as if Houllebecq needed to novelistically examine the mess in his own mind, before he could embark on his life's mission of messing with everyone else's. The Complete Review haven't yet critiqued any of the later novels , yet I doubt whether the adjective "decently" would feature so prominently if they did.
Posted by Inner Diablog at 8:40 pm