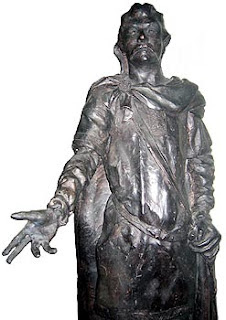 My present immersement in Albania's Kanun has rekindled my interest in the codification of the blood-feud and other aspects of Anglo-Saxon good manners. Take the laws of Aethelbert, King of Kent (560-616), which set out clear penalties for humping female members of the royal household:

The mid-section of Aethelbert's code deals with the prices to be paid for inflicting various wounds. A struck-off ear cost 12s, a merely pierced one 3s, though if it were also mutilated the perpetrator would have to cough up 6s.

"Let him who breaks the chin-bone pay for it with twenty shillings...for every nail, a shilling..."

Three leud-gelds were in effect 3 x the wergeld for ordinary manslaughter, a clear deterrent against low-blows!
Posted by Inner Diablog at 4:00 pm