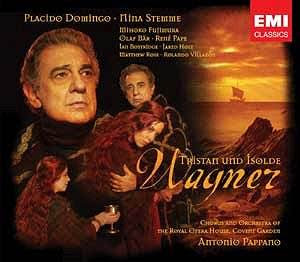 If there is one opera responsible for the phrase "it's not over until the fat lady sings" this would be it. Pretty much the whole score is a long, lyrical build-up to Isolde's final heart-rending transfiguration.

Harmonic suspension is the technical term for the musical form that Wagner show-boats here. You won't be nearly as moved by the Liebestod if you hear it as a stand-alone aria. You really do have to soak up the whole magnificent three act opera.

Ever since I first saw Plácido Domingo dressed up like a dickhead and sitting on a swan on the cover of Solti's Decca recording of Lohengrin, I have wanted to hear the Spanish tenor in one of the preeminent German roles, but it wasn't until I recently downloaded Sinopoli's recording of Tannhäuser (which features a similar wardrobe malfunction on the box) that I was reminded of the unique blend of extraordinary power and emotional subtlety he brings to every role.

It's amazing how young Domingo sounds in this recording with the Covent Garden orchestra and chorus. He has never sung Tristan live as it might have had terminal consequences for his ageing voice. (The tenor that Wagner originally composed the part for went bonkers during rehearsals.) This recording was made in the studio over a period of time and will apparently be the very last studio-recorded opera that EMI releases.

As an adolescent I was fascinated by the Grail legends. By the time I finally sat down, headphones on, to experience Wagner's masterpiece, I had already devoured most of the extant medieval cycles, plus of course Thomas Mallory and Tennysson's Idylls of the King.

Tristan certainly has more going for it in terms of plot than Parsifal, which I would up to now have cited as my 'favourite opera'. (Not that I'd want to sit through that many live performances of it, compared to say my second favourite opera, Così fan tutte.) I had a recording made by Leonard Bernstein on tape which I hadn't listened to for about 20 years, but now after hearing this one, I might have to elevate Tristan to the top of the pile.

I first had a tip-off that Tristan und Isolde might well be the summit of musical achievement by a crabby retail ad designer to whom I had been assigned as part of my internship at Saatchi & Saatchi in 1986. I already had acquired a taste for opera because my social circle then included a pair of twins sired by an established opera singer and a ballet dancer, and one of my mother's closest friends was married to the director of the now-defunct Sadlers Wells opera company. These relationships provided useful opportunities for free samples, and with the twins Baksheesh and I used to get complimentary seats in the stalls at the Royal Opera House, where we drank wine from the bottle and generally narked off the hardened, well-to-do enthusiasts around us. Having said that we did our best to be the most overdressed members of the audience.

Personally I think there is no excuse whatsoever for opera in today's world unless it has something useful to say about the human condition. For that reason Puccini (and much of the earlier bel canto tradition) is mostly complete tosh, hardly better than your average West-End musical, though considerably more pompous and expensive. In fact, other than the scene in La Bohème where Mimi first enters the garret, Puccini is really best avoided altogether. With the exception of Verdi's expansions of Shakespeare, the best Italian opera was composed by an Austrian.

Not to be confused with Tristan + Isolde.
Posted by Inner Diablog at 11:37 pm