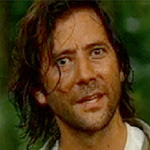 When it comes to deciding whether this series is of lasting metaphysical interest or a load of bollocks, this episode in particular will have to be given special consideration.

What we saw was the pivotal character of Desmond in a loop between two realities with the writers cleverly exploring weird parallels within weird parallels. (We also saw a number of badly-faked London exteriors and then learned that the background to the picture of Des and Penny in a marina was itself an amateurish phoney.)

Now hokum is just plain hokum when supernatural events are deployed will-nilly within a storyline, but they can serve a useful creative function when used to encourage us to consider what might happen if certain individuals should have privileged access to the otherwise unknowable aspects of human experience (yet in such a way that preserves the unknowability of transcendent reality for the rest of us).

The writing team don't have to provide fixed and final explanations for everything that happens in Lost, anymore than they are obliged to explain the meaning of life, but they do have to leave us with a sense that they have been systematic (and sincere) in spinning their metaphysical web, and that the end result has somehow connected with our subconscious intuitions about those aspects of existence that necessarily remain off-limits to scientific reason.

Personally I was impressed with this episode until Desmond asked the lady in the jewelery shop if she was his subconscious. But it did open up the possibility that everything we see on Lost is some sort of representation of the collective subconscious of the islanders.

With his special relationship to chronological time, Desmond is bound to have some affinities with Hurley that will doubtless be expanded upon later.

We're clearly reaching the point where an episode such as this can only be fully appreciated by someone that has seen pretty much every other one, which marks a clear point of differentiation between this series and your run-of-the-mill soap.
Posted by Inner Diablog at 6:01 pm