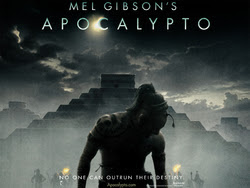 Some may be wondering if this sort of thing is more or less bigoted now that's there's no longer a need for screaming blonde damsels or seven storey primates to frame our interest in archetypally unfriendly natives?

It turns out Gibson's movie isn't really about the ancient Maya after all. Other than great entertainment, it's another exploration of the meaning of the Amerindians' forced dis-isolation from the rest of the World in the late fifteenth century − some six hundred years in fact after the Classic Maya collapse.

The indigenes hostility no longer needs to be directed at us because they have kindly lined up in the two main teams that we have always consigned them to: In the blue corner we have the noble-savages: wise, fun-loving hunter-gatherers at one with their forest habitat. And in the red corner we have the somebody else's skin wearing types with their penchant for industrial level human sacrifice (matched with a bed-wetting terror of precisely the kind of celestial events that ancient Mayan astronomers had managed to identify and predict with such unique accuracy.)

Even the creatures of this forest aren't the sort to hang around smiling sweetly on Pocahontas' shoulder. Not unless they fancy tucking into her face for breakfast that is.

Yet there's no wanton ignorance of the facts going on here. Gibson has gone about his re-concoction of history with his customary single-minded vision. Everything is carefully calculated to carry out its function in terms of cinematic drama, imaginative storytelling and symbol-making, and all together it works pretty well and was playing to a packed house at Cineworld.

When the Royal Academy held its Aztecs exhibition in London four years ago I remember thinking at the time that the nightmarish qualities of that civilisation had been deliberately played down in order to emphasise the more refined tastes that the RA's patrons would more readily identify with. There's no question that the Mesoamerican tradition of blood sacrifice that most likely began with the Olmecs had reached its apocalyptic apogee in the sixteenth century, with the first Spaniards on the continent witnessing the mass slaughter of up to 80,000 individuals. Controversy will however continue to surround Gibson's use of the Maya here, perhaps driven by the desire to employ actors from a semi-intact native culture speaking their own language (as opposed to Nahuatl).

While I was away I read a chapter in the Rough Guide about the growth of pan-Mayan consciousness, or Mayanidad. Several standard drivers for this were suggested, such as the intensified political oppression of the eighties. The notion that Western culture fascination with the heritage of ancient Maya might also have been important in helping the modern tribes to recover their heritage was not mooted. Yet on balance I think the Maya have benefitted from the spotlight thrown on them by the likes of National Geographic, and Mel Gibson's singular film should do little to undermine this progress.
Posted by Inner Diablog at 8:52 pm

I agree with you my dear Blogador, it is a great movie!

Have yet to see the fil, hare blood and gore, but wil try to do so soon.

Enjoy your blog, always informative and entertaining. Keeps me connected with Guate though I live by the Brighton beach,

Email me any comments about the Rough Guide if you like!