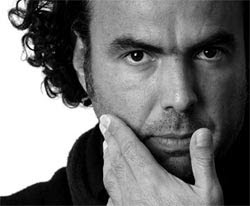 "I wanted to explore the contradiction between the impression that the world has become quite small due to all the communication tools which we have, and the feeling that human beings are still incapable of expressing themselves and communicating amongst themselves on a fundamental level."

Well, if that's what Alejandro González Iñárritu set out to do with Babel I think he was largely successful. I did not detect any of the pretentious "we are the world" whacko-Jacko preachiness that Mark Kermode reported on Five Live last week. In fact, this movie is a fair way from being classically arty-farty, though it does have its roots in Mexican art-house.

Ok, the preview was rather pretentious, but the movie itself no more so really than Crash or Traffic. It may seem so simply because it isn't rooted in a very concrete topic like the narcotics trade or racism. The problem described above by the director is that much more nebulous. (The scene where Pitt blubbers all over the phone is a bit unnecessary though! And the one where he picks a fight with a disagreeable English tourist made me laugh.)

A friend of mine that walked from the cinema before the ending of the film complained, like Kermode, of the tenuous connection between the three main stories. Some seem to single out the Japanese thread as the loosest. But I detected a common theme of neglected children in all three.

Iñárritu and his usual collaborator Guillermo Arriaga are the acknowledged specialists in the manufacture of multi-stranded narrative, and unlike their native Hollywood equivalents (such as Paul Haggis, the writer-director of Crash) they don't literally litter their scripts with unmissable links between their characters. The result here is a composite story that is perhaps more intriguing than gripping.

If you like your empathetic encounters with human truth to be very clearly sign-posted (like the scene in Crash where the racist cop saves the woman he abused the night before from a burning car) then perhaps you will find this film just a little dull. I found it quite moving, and it resonated with an idea for a story that has been gestating in my head for a while, about miscommunications and misconceptions between the citizens of Antigua and those that visit it. It has the working title of Gringos...and has no plans to adopt a global perspective.

Arriaga seems to experiment within his standard formula each time he fashions a script. In The Three Burials of Melquiades Estrada only the first half is non-linear. In Babel he develops further the technique of running together alternating stories that are tellingly shfted in terms of chronological time.

One thing that follows from the stated aims of this movie is that it isn't all that interested in revealing to us the full consequences of the plot for each of the characters, though Amilia, the deeply unfortunate housekeeper-nanny, is the major exception.

There's some great dialogue for connoisseurs of Mexican Spanish, such as "Este pinche buey anda bien pedo" and a fine original score from Argie composer Gustavo Santaolalla, who also worked on Amores Perros, 21 Grams and Walter Salles' Diarios de Motocicleta.
Posted by Inner Diablog at 12:19 am