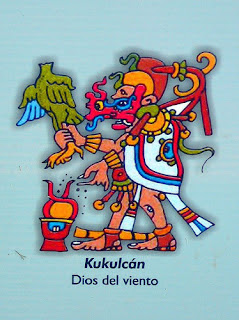 How many reviews of Apocalypto have I both read − and listened to − that refer to the Maya sacrificing people to their "sun god".

Watch the film maties; nowhere is a sun god mentioned. All these rolling heads are in fact accidental decapitations resulting from fully dignified, non-sectarian executions, dedicated in fact to Kukulkán, Maya God of the headless chicken. (Illustrated).

In seriousness, the Maya sun god was known as Ahau-Kin, "Lord of the Sun Face". Between sunset and sunrise he doubled up as the Jaguar god, a lord of the Underworld, for at those hours he journeyed from west to east through the lower regions of the world. Itzamna, the great god of knowledge was also associated with the sun, but not human sacrifice.

Kukulkán was the Toltec-Maya equivalent of Quetzalcoatl, the feathered serpent god. Human sacrifice to this deity, as depicted in Mel Gibson's movie did indeed occur, though animal sacrifice was more common. The great temple at Chichén Itzá, known to the Spanish as El Castillo, was a centre of quite visceral devotion to Kukulkán.

The Mexica ('Aztecs') sacrificed on a monumental scale to their gods of war, night, fire and rain. The tribal deity Huitzilopochtli did however have some associations with the sun.

One day someone will make the movie of the conquest of Mexico-Tenochtitlán . It's frankly amazing that it's never been done. I'd like to try to develop a script myself. It's actually really more mini-series material because there are distinct phases and the audience would need to appreciate the passage of time. There would be some amazing set pieces. The Pizarros in Peru would make a natural sequel! (I guess that the only way to include a significant female role would be through La Malinche, recently the subject of a novel by Mexican authoress Laura Esquivel.)

It strikes me that the late-classic Maya would have been more likely to sacrifice to their gods of corn or of rain (Chaac), than their sun god, whose prominence in the western re-imagination of pre-Colombian cultures owes a great deal to the Incas. Gibson's eclipse at the temple scene has antecedents in Tintin and the Picaros and several B movies before that.

As ever, Wikipedia has the low-down on Mayan mythology.
Posted by Inner Diablog at 9:12 pm

speaking of Chaak, ever see the film Chac, the Rain God?

Have a link to the Pew survey?