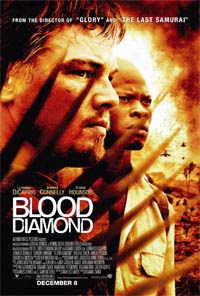 Whether or not Africa itself deserves to be described as a little bit OTT this flick certainly does.

And at first it seems to lack the underlying sympathy for the plight of the continent that marks out other recent films that have successfully evoked its heart of darkness, such as Hotel Rwanda and The Constant Gardener. Instead it appears to be assuming a combination of the perspectives of its two white protagonists, the one cynical the other voyeuristic. Yet there's also more humour in this bloodbath, and as the story and its key characters fill out, it becomes more moving and disturbing, while the tension winds up very nicely.

De Caprio is superb. Like Brosnan in Matador, his performance is often the most engrossing thing on view. He's one actor I would not have expected to be so convincing in an action role. There's something unequivocably real about his ruthlessness. Bond may shoot to kill, but when have we seen him put a second bullet in the back of the prone body of the goon he's just taken down?

Jennifer Connelly plays the American reporter who "gives a shit", though not apparently about her press pack colleagues who are mowed down all around her without provoking a single word of sympathy or regret.

If certain aspects of the plotting are unsubtle, at the level of dialogue the script is deceptively good. And I particularly liked the way Hounsou's character Solomon Vandy is carefully held back, a quieter brooding presence a step or so behind the others, that is only properly unfurled in the final act.

Blood Diamond doesn't manage to shake off all of its contradictions, and those who stop to consider its most obvious public information messages are likely to end up a little confused. Does it really want to stop grooms and gangstas buying those big rocks? (Or is it more concerned about child soldiers?)

The civil war in Sierra Leone belongs to an earlier era − just − and a good deal has changed in the way diamonds are sourced and marketed since then. Yet although the conflict is now over we are told at the end, the onus is still on the consumer to steer clear of the conflict diamonds. And against the grain of the pervasive didactic intent, Jennifer Connelly's character at one stage seems to be pushing the message that no amount of awareness-raising in the rich world's media is ever going to make much of a lasting difference.

Nevertheless, such as it is, this film will probably reach and influence a far bigger audience than a more serious and consistently well-meaning one might have done. Not bad at all.
Posted by Inner Diablog at 5:47 pm